E10 petrol safe for off-road use? 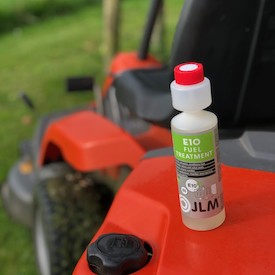 Most attention on E10 petrol has focussed on motorcars but JLM Lubricants explains that ethanol-laced fuel can affect other engines, too.

Any credible company must take its environmental responsibilities seriously. JLM Lubricants is no different. Yet, it makes little environmental logic for a supposed eco-friendly fuel to reduce engine life and there is even less sense prejudicing safety. E10 can be responsible for both issues.

Why E10?
To replace a proportion of fossil-fuel derived petrol with a 'renewable' alternative, ethanol is blended with pump fuel to a current EU maximum of 10% by volume.

As ethanol tends to be produced from food stocks, rather than crude oil, it is promoted as environmentally-friendly. This may lead you to think that it is harmless. In reality, E10 is aggressive towards certain materials, lacks vital lubrication qualities and is relatively unstable. Additionally, It does not mix well with petrol and is hygroscopic. When the ethanol content of E10 absorbs a critical mass of moisture, it separates. This 'phase separation' causes a relatively low octane, stale fossil-fuel petrol to sit above a worthless, incombustible, cloudy gunk that can cause the engine to cut-out, should it be sucked into the fuel system.

Why are small engines different to cars?
Most motorcars are used all year-round and their fuel tanks are replenished relatively regularly with fresh E10. Boats and small engined tools, such as lawnmowers, or chainsaws, are more likely to be run seasonally. Winter especially presents the worst conditions for E10. Fluctuation in ambient temperatures, coupled with a damp atmosphere accelerates the water absorption and phase separation processes, resulting in difficult starting, or even damage, when the better weather returns.

Corrosion presents a further problem, regardless of whether E10 has phase-separated, or not. The ethanol deteriorates not only certain resins, rubbers and plastics but also metals. While many small engines tend not to possess fine-tolerance fuel injection parts, some older materials, such as carburettor aluminium castings, plastic floats, brass butterflies and rubber diaphragms, are attacked by ethanol.

E10 is also an effective cleaner but not in a good way. While it loosens caked dirt within the fuel system, it drops it in vulnerable places, such as carburettor jets, where the resultant blockage can cause either poor running, or stalling. While installing extra filters into the fuel line might help, they are unlikely to provide full protection.

Highly-stressed, smaller, air-cooled two-stroke engines are also vulnerable to overheating. The relatively high proportion of oxygen molecules within ethanol leans the fuel/air mixture, resulting in a hotter burn that generates excessive heat. As these engine types lack electronic management and fuel injection, there is no automatic compensation. Pre-ignition poses another problem, which is not always that easy for the operator to hear, when operating a relatively noisy two-stroke engine. Again, with no 'knock' sensor present, the engine management system cannot correct the problem and avert severe damage.

While corrosion and overheating can court mechanical failure, a far greater problem lurks. Apart from being environmentally damaging, petrol leaks pose an obvious hazard. Even at E10's low concentrations, the ethanol dissolves certain resins and attacks particular polymers, such as those used in older fuel lines, making them more brittle and increasing the leakage risks.

JLM's MD, Gilbert Groot agrees that we should all do our bit to reduce carbon dioxide emissions but he reveals why concerns over E10's technical consequences led to the company launching its latest fuel additive.

The new E10 Fuel Treatment also slows-down phase separation process. As ethanol also does not contain any lubricants, the JLM E10 Fuel Treatment contains extra protection for valves and seats to help them tolerate potentially higher temperatures. This is especially relevant, if you do not adjust the fuel/air mixture settings sufficiently accurately to compensate when switching to E10.

However, while JLM E10 Fuel Treatment has its advantages, Mr Groot admits that it cannot restore neglected systems and owners will need to conduct extra work on older engines. Where phase separation has occurred already, for example, the fuel tank will require to be drained, at the very least. Additionally, nitrile rubbers within the fuel system must be renewed with newer ethanol-resistant materials, such as Viton, or a suitable alternative. Fiberglass fuel tanks must also be replaced, because even JLM E10 Fuel Treatment will not stop the resins from being broken down by the ethanol.

While it will not solve every problem that ethanol presents, JLM E10 Fuel Treatment plays a vital role in your defensive armoury, helping you to maintain and preserve your fuel system and engine.