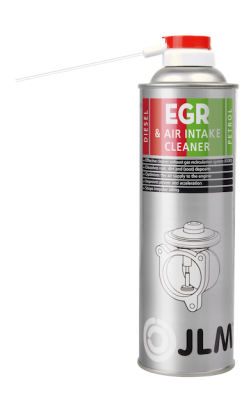 JLM Petrol Air Intake & EGR Cleaner has been specially developed for cleaning the soot accumulation and other deposits in the exhaust gas recirculation system (EGR).

Watch this great tutorial of the Driveway Dudes, how to clean an EGR valve with JLM EGR Cleaner, watched almost 2 million times!

To view this video you must agree to the cookie notification

Combustion engines must meet increasingly stringent environmental requirements and yet are supposed to emit less and less harmful exhaust gases, such as for example nitrogen oxides (NOx). For this reason, car manufacturers are continuously devising new advanced solutions. One of the solutions is to reduce the emission of harmful gasses using Exhaust Gas Recirculation (EGR).

Chemical reactions are continuously taking place due to the combustion process. If the quantity of nitrogen oxides decreases, this chemical reaction causes soot. For diesel engines the quantity of soot is higher than in the case of petrol engines. The soot adheres to the components such as the articulating EGR valve, which determines how much soot re-enters the engine, the intake manifold and the valve seats, pistons and piston rings on the intake valves. Eventually the EGR valve will seize up, and the closing action of the valves will deteriorate. The engine will progressively deteriorate in terms of performance and idling, and will eventually give up the ghost. The piston rings and oil scraper ring will also start to seize up resulting in a less effective seal with the cylinder wall and so the engine will start to consume oil.

Soot and other deposits never disappear from the engine's intake system by themselves. For this reason it is extremely important that a car's intake system is properly checked during services and protected against any build-up of dirt resulting from exhaust gas recirculation. JLM Petrol Air Intake & EGR Cleaner (J03140) and Diesel Air Intake & EGR Cleaner (J02710) are effective cleaners, which quickly remove soot and other deposits throughout the intake system and engine.

c. Before EGR valve (cleaning EGR valve), depending on which part you want to clean.

IMPORTANT:
- Do not spray directly through intercooler
- When applying JLM EGR Cleaner the engine rpm can increase or decrease and diesel knocking may occur. This is due to the addition of liquid, and the change in the air/fuel ratio.

WARNING: DO NOT SPRAY LIQUIDS INTO THE TURBO AND/OR INTERCOOLER

These instructions will help you to carry out a thorough cleaning procedure. However, if you have any doubts, we advise you to stop the procedure and ask for advice from us or from a professional car mechanic.