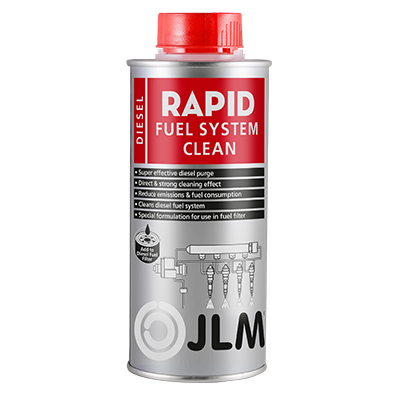 In addition to the well-known JLM Diesel Fuel System Cleaner there is now an extra-concentrated JLM diesel system cleaner available for use directly in the fuel filter. A powerful remedy for the professional.

To view this video you must agree to the cookie notification

JLM Rapid Fuel System Clean J02330 is a highly concentrated diesel system cleaner, which enters the motor undiluted via the fuel filter and removes soot deposits in the fuel rail, from injectors, valves, pistons, and from the combustion chamber.

In the first instance you will not notice any of the internal build-up of dirt, but as the engine gets older and its mileage increases, power loss occurs and the engine will start to run less and less efficiently. Amongst other things, the build-up of dirt is responsible for the piston rings starting to stick to the piston and no longer being able to press against the cylinder wall. As a result leaks occur between the pistons and the cylinder wall, compression in the cylinders decreases and oil consumption increases because the oil scraper ring no longer retains oil.

Help a car to get through its general periodic (MOT) inspection.

The build-up of soot in the engine is inextricably linked with emissions of soot through the exhaust. Diesel cars are checked for soot emissions during their general periodic (MOT) inspection. If the quantity of soot is too great, the car will fail.