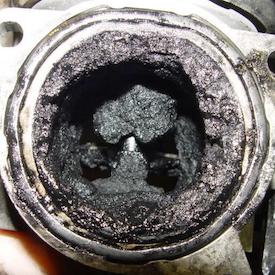 Car engines must meet increasingly stringent environmental requirements and yet emit less and less harmful exhaust gases, such as nitrogen oxides (NOx). One of the solutions, which car manufacturers have devised for this, is Exhaust Gas Recirculation (EGR).

Soot and other deposits never disappear by themselves
Chemical reactions are continuously taking place due to the combustion process. If the quantity of nitrogen oxides decreases, this chemical reaction causes soot. For diesel engines the quantity of soot is higher than in the case of petrol engines. The soot adheres to the components such as the articulating EGR valve, which determines how much soot re-enters the engine, the intake manifold and the valve seats, pistons and piston rings on the intake valves. Eventually the EGR valve will seize up, and the closing action of the valves will deteriorate. The engine will progressively deteriorate in terms of performance and idling, and will eventually give up the ghost. The piston rings and oil scraper ring will also start to seize up resulting in a less effective seal with the cylinder wall and so the engine will start to consume oil.

Soot and other deposits never disappear from the engine by themselves. For this reason it is important that a car's intake system is properly checked during services and protected against any build-up of dirt resulting from exhaust gas recirculation. JLM Petrol Air Intake & EGR Cleaner (J03140) and Diesel Air Intake & EGR Cleaner (J02710) are effective cleaners, which have been specifically developed to remove soot and other deposits that occur throughout the engine's intake system and in the engine itself.

Avoid costly breakdown ask for cleaning
In your car's engine many processes take place, which cause an internal build-up of dirt. You don't see this as the build-up of dirt progresses slowly, so you won't see that the engine performance is deteriorating and fuel consumption is increasing. To prevent the engine from eventually seizing up completely as a result of getting blocked, in the interim or during a service you can ask your garage to clean the intake system of your engine with JLM Air Intake & EGR Cleaner.

As a car company you can clearly inform your customer about everything that is going on in his/her car's engine and advise him/her about preventive maintenance. You keep your customer's car engine clean and prevent it from suffering the fate of unexpectedly breaking down. You can also help your customer avoid incurring exorbitant repair costs for expensive or difficult-to-access parts. Prevent the EGR warning light from coming on on your dashboard and provide your customer's car with a preventive clean using JLM Petrol and Diesel Air Intake & EGR Cleaner.

For this reason it is extremely important that a car's intake system is properly checked during services and protected against any build-up of dirt resulting from exhaust gas recirculation. JLM Petrol Air Intake & EGR Cleaner (J03140) and Diesel Air Intake & EGR Cleaner (J02710) are effective cleaners, which quickly remove soot and other deposits throughout the intake system and engine.