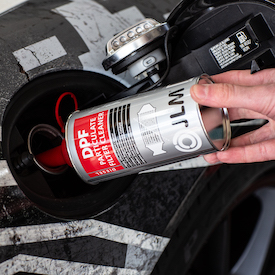 Modern passenger cars and diesel-engined vans are equipped with a diesel particulate filter. This filter captures air polluting gases from the engine that would otherwise end up in the environment. In the course of time the filter becomes full. The car's electronics ensure that this soot is burned during motorway driving or when the engine is under a heavy load. This is known as regeneration.

As a rule the diesel particulate filter is usually regenerated successfully in cars that are used for extended trips on motorways and are regularly driven at higher speeds. This is not the case in cars that are hardly ever or never driven long distances but are mainly used for around-town driving. In this group of cars in particular, the regeneration process is unable to start as the engine does not reach a sufficiently high temperature. Another common problem in these cars is that the regeneration process is started, only for it to be cut off prematurely because the destination has been reached before the engine temperature is sufficient.

Iron in the additive causes ash which blocks the DPF
Unlike conventional additives, JLM Diesel Particulate Filter Cleaner conditions the engine and the DPF using so-called ‘catalytic materials’. This allows the engine to perform better and reduces fuel consumption. But just how do the additives actually work?

A disadvantage to burning iron is, however, that ash is created during the burning process. On the one hand the additive does burn the soot, but on the other hand it is replaced by ash. This means: the greater the amount of iron the greater the amount of ash left in the DPF. And in the long run ash causes blockages which cannot be regenerated; you can’t burn ash after all. Moreover, the presence of ash means that the DPF is cleaned less effectively.

JLM DPFC cleans sooner, quicker and better
JLM Diesel Particulate Filter Cleaner comprises a patented platinum-cerium compound. The JLM DPFC encapsulates the soot particles in the DPF. As a result of the platinum-cerium compound the soot particles are burned at a lower temperature and burn much earlier and quicker. Because of these properties the combination of platinum and cerium ensures significantly better regeneration and therefore cleaning of the DPF in comparison with conventional cleaners.

Another advantage of JLM DPFC is that the additive initiates cleaning of the DPF at a much lower temperature than conventional additives. So even during short trips at lower speeds, for example, during around-town driving. When using conventional additives containing iron the regeneration still has to be initiated using a diagnostic tool or by a trip at considerable speed on the motorway. This is a time-consuming task.

Significantly longer DPF service life
As a result of the JLM cerium-platinum formula less ash will form and be deposited in the DPF. This means that the DPF will not become blocked as quickly and will have a longer service life. To prevent ash in the DPF manufacturers of conventional DPF cleaning additives reduce the amount of cerium and iron in the additive. This results in a dramatically poorer regeneration performance.