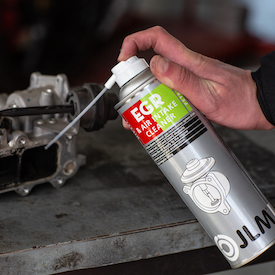 Petrol engines are giving ever better performance and are becoming ever more powerful and economical. But by driving short distances, sometimes with poor quality petrol and contamination in the fuel system, the performance of the engine is adversely affected.

Modern petrol engines with direct fuel injection under high pressure, high specific power from the use of turbos and a high proportion of exhaust gas recirculation, are very sensitive to contaminated fuel. This leads to one or more fuel injectors not being able to function optimally. This causes incomplete combustion, which in turn causes carbon deposits on the top of the cylinders, on the inlet and exhaust valves and in the EGR system. The deposits lead to even less complete combustion. Certain driving conditions, such as short journeys and driving with low revs and low loads, all add to the problem.

As well as the JLM Petrol Injector Cleaner which has been available for some time, JLM has now developed two new products for petrol engine fuel systems. These products nip the problem in the bud. The professional has a complete arsenal to hand in his efficient fight against the most common forms of contamination: JLM Petrol Air Intake & EGR Cleaner and JLM Petrol Catalytic Converter Cleaner.

The powerful formula cleans the recirculation system valve, the intake system, the air mass meter and the inlet valves themselves. JLM Petrol Air Intake & EGR Cleaner restores the air supply to the engine, improving the power. In addition, emissions are reduced to a minimum.

The cleaner also cleans the entire fuel system and prevents fouling of the catalytic converter. In contrast to most other products, JLM Petrol Catalytic Converter Cleaner also contains a ‘combustion improver’. This directly improves combustion in the engine even before the cleaner has cleaned the entire fuel system. The results can be seen immediately in lower emissions figures. This will help the car pass the emissions test in the annual check for example, so the customer can get back on the road again more quickly.