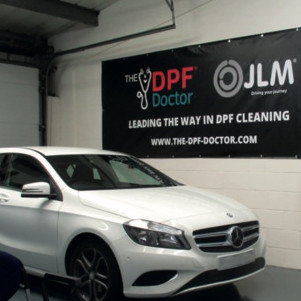 This low mileage (38,000 miles) Mercedes A200CDI was presented to us recently with suspected DPF problems. The car had been well maintained with a full service history but was lacking in power. We were asked to assess the vehicle. So, what was going on?

We started with a global scan of the car to see what fault codes were present. This would give us some direction. As always it is important we do not simply read a fault code and rely on the diagnostic tool to do the job. We were presented with three fault codes: P0299- Boost pressure of turbocharger is too low; P2263 – The boost pressure deviates from specified value; P2002 – DPF efficiency below threshold.

Direction
We now had a clear direction. The next step was to carry out some tests to determine what was causing the problem. In so many cases we see parts that are changed on the basis of fault codes. What this means is that a new turbo or DPF is fitted when in reality they are not the solution. The problem remains, at great cost to the customer.

With any low boost condition fault, we always start with a smoke test to rule out any leaks. Tests on this vehicle showed we did have a boost leak. We then looked at the DPF pressure so see if it was too high or too low. This gave us some direction. On live serial data the DPF pressure was reading zero so we could be dealing with a dead sensor or a wiring issue, or perhaps neither. We then moved on to measuring the actual DPF pressure and testing the plausibility of the pressure sensor. This was where, pardon the pun, we were really motoring. The backpressure from pre-DPF was measured at 68mb at idle. Was this the cause of the low boost problem? Was the DPF actually blocked? So why did the pressure read 0 on live data? Was the sensor dead?

We continued with our assessment to determine the answers to these questions. We then tested the backpressure post DPF. This also measured 68mb at idle so our pressure was actually coming from downstream of the DPF and not the DPF itself. This also explained why we had 0mb on live data as the DPF pressure sensor is a differential pressure sensor, not a back pressure sensor. The difference in pressure pre and post DPF was actually 0.

This model of vehicle uses an exhaust flap at the rear of the exhaust to divert exhaust gases via the low pressure EGR valve so this was the next place for us to take a look. Sure enough, the exhaust flap was seized in a closed position causing an exhaust restriction that in turn caused a low boost condition. The flap/motor was replaced and we now had a differential pressure reading of 4mb at idle with boost pressure now meeting the desired levels. No unnecessary parts were fitted. Job done!

Read here the article on Aftermarketonline.net