Over to you: Ewan Lawson Motors 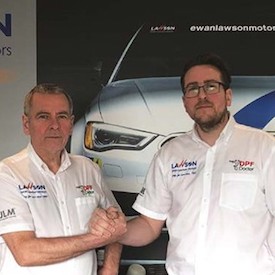 Barry Lawson is the owner of Ewan Lawson Motors in Larbert, central Scotland. Since 1983 the team have focused on servicing and repairs, “doing our best to keep customers happy”. Barry reveals why he joined the DPF Doctor Network and how his business has benefitted.

“We started to see cars and vans coming in with the engine management or the DPF warning light on. I am somewhat embarrassed to admit we were pretty clueless and didn’t have the right tooling. So, we did what I suspect many mechanics do when knowledge of DPFs is conspicuous by its absence. We added a couple of tins of something and blasted it on the motorway to see if it solved the problem.”

It was this lack of knowledge, plus a growing number of vehicles they were seeing with DPF problems, that led Barry to start following Darren Darling, founder of The DPF Doctor Network, on Facebook.

Barry explains: “I was picking up some great tips, but cars were still coming back when I thought we’d fixed them. Meanwhile, The DPF Doctor Network was growing in popularity, with one appearing in Carluke, a short drive from my workshop, in the shape of ACR Tuning run by Euan Abercrombie.

“Euan came to my workshop and fixed a couple of DPF faults. On his suggestion, I called Darren to discuss joining his network. I took the plunge, the kit arrived and I set off for training to Darren’s HQ in Ashington, in the North East of England.

“The first weekend of training was a total eye opener and I wondered if I’d bitten off more than I could chew. But I met three top technicians; Mark Shipman, Sean Lynch and Steven Paterson, and they spurred me on. I realised I had to raise my game and learn from these guys. The help was, and still is, outstanding – with a level of technical knowledge and application unlike anything I’ve ever experienced.”

In the first year, Barry made six trips to Ashington to build his knowledge, “Not only with DPF systems but with all things vehicle related, including the day-to- day problems we come across while running a garage.”

“The ongoing training is top notch,”says Barry.“We use JLM Lubricants’ products in our workshop because they have been developed for the trade but not every car that comes in needs a product and this is where my DPF training proves invaluable. We’re now experts at diagnosing the real reasons behind the lights and not simply relying on a product and crossing our fingers!”

“Being part of The DPF Doctor Network has been fantastic for Ewan Lawson Motors. It’s significantly enhanced our skill sets and knowledge so much so that our customer base now covers all of Scotland. We are now officially DPF experts! We’re also doing a significant amount of work for other garages. I’m undoubtedly much more ambitious for the business. 2019 was our best ever year. We doubled our workshop space and are now looking to recruit more technicians. It has been tough at times running a business and taking on the training, but it’s well worth it. I am very proud to say I’m a member of The DPF Doctor Network,” says Barry.

Darren Darling has 90 DPF Doctor Network Members worldwide, with ambitious plans for growth in 2020. Member training is delivered at The JLM Academy in Ashington by Darren and a number of other respected trainers, including Dave Massey of ADS and Steve Scott, founder of The Simply Diag Network.

Read the whole article on Autotechnician.