The challenge: A 2009 VW Golf 2.0 TDI with recurring DPF problems and no fault codes stored 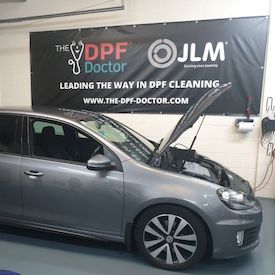 This low mileage VW Golf was presented to us after an unsuccessful trip to the main dealer where the customer was told there was nothing wrong with the car. The customer’s complaint was that the DPF warning light would illuminate every 100 miles; MPG was poor and the car was smoking excessively during regeneration (white smoke). As always, we carried out a thorough assessment of the vehicle to find out why the car was having these issues.

I suspected that the lack of any fault codes was the reason the owner was told that the car was fault-free but clearly we had an issue as the car should not be in DPF regeneration mode so frequently. We quickly determined this was not caused by a blocked DPF as the DPF was very clean and there were no mechanical issues with the car.

Extended road test
Our next step was to carry out an extended road test while recording live serial data. If the customer had predicted correctly then we would see the DPF symbol illuminate in the next 20 miles or so. Sure enough, the Diesel Particulate Filter light came on during the road test and the vehicle initiated DPF regeneration. This now gave us an opportunity to monitor the car during regeneration to see what was going on. We noticed that our temperatures during regeneration were too low and that the car did indeed smoke very badly.

Because of the low temperature, the duration of the regeneration was also excessive, taking over 40 minutes to complete. This is not uncommon and we have seen this caused by a software issue on many occasions. We then consulted our database and could see this exact problem with the software version so our next step was to carry out a software update and repeat the extended road test.

The car was noticeably smoother and quieter following the update but it did not initiate regeneration. Although a good sign, we had not seen any evidence yet that it had improved. So, we headed back to the workshop to carry out a forced regeneration so that we could monitor temperature, smoke and regen duration.

We were now happy with the temperatures; the excessive smoke had gone and the regen duration was back to normal. We were confident that the software update had fixed the car.

This job highlights the need for the independent workshop to invest in the correct tooling to carry out software updates because they are becoming more common. No unnecessary DPF cleaning was required to sort this DPF problem out and no new parts were fitted to the car, keeping the cost acceptable for the car owner.

Another job done and another happy customer!