What are the effects of excessive carbon deposits in combustion chambers? 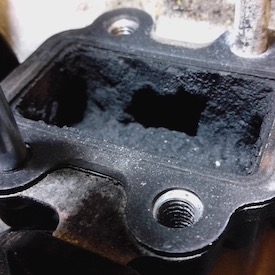 Since diesel engines depend on compression for ignition, the total volume of the combustion chamber is of critical importance. Bear in mind that since diesel engines are not throttled like petrol engines, the ECU (Engine/Electronic Control Unit) does not control the volume of the intake air. In simple terms, the ECU assumes that enough air is available to combust the volume of fuel that is delivered to each cylinder, with the volume of fuel being determined on the basis of input data from a variety of engine and driveability sensors.

As a practical matter, one parameter that a diesel fuel control system considers when calculating a fuel delivery strategy is the volume of the combustion chamber at the point of full compression. Thus, if some of that space is taken up by carbon, the ECU cannot compensate for it because it does not control/monitor the volume of the intake air, with the result that there may not be enough air present to combust all, or most of the fuel that is being injected.

The detonation flame front is disrupted

However, in practice, a carbon deposit in a combustion chamber looks much like a miniature mountain landscape, with peaks, valleys, and variations in thickness that can vary from a few microns, to several millimeters. Therefore, as the engine warms up, the carbon deposits also heat up until some parts of it become red-hot, which then act like miniature glow plugs, which in turn, can ignite the air/fuel mixture prematurely.

The practical effect of this is that the detonation flame front propagates in unpredictable ways, and in some cases, the flame front can be extinguished by several, competing ignition events long before the piston even reaches the point where ignition would normally have occurred. While modern diesel fuel control strategies have largely reduced the incidence of premature ignition, these strategies have not eliminated it entirely and if premature ignition is allowed to continue over extended periods, severe engine damage is usually the result.