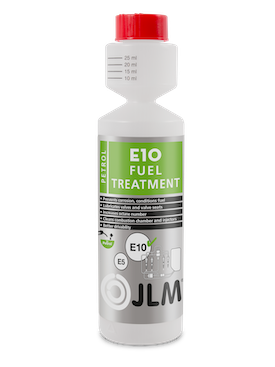 The JLM E10 Fuel Treatment
JLM Lubricants is proud to unveil the latest arrival to its family of quality additives. The JLM Petrol E10 Fuel Treatment is an easy to use solution to resolve the issues that are caused by blending up to 10% ethanol with unleaded petrol.

The environmental challenges
While engines have evolved to produce lower carbon dioxide (CO2) emissions, so too has petrol. To replace a proportion of the fossil-fuel content with a renewable alternative, ethanol is added to a current EU maximum of 10% by volume. However, being a bio-fuel might fool you into thinking that ethanol is harmless. Sadly, it is not.

Should your car be E10 incompatible, use E5 (or E0) instead. According to ADAC, a single tankful of E10 in an incompatible vehicle can cause serious, lasting damage. Corrosion is the main problem, with the ethanol munching through certain rubbers and metals, resulting in dangerous leaks, or expensive mechanical failure.

Most post-2005 cars are Type Approved to run on E10 fuel, which became a mandatory requirement for new models sold in the EU from 2011. To check your car you can visit one of the online E10 Compatibility Checker websites. Yet, even if your car is E10 approved, do not expect it to be immune from other issues that ethanol introduces. This is where JLM's E10 Fuel Treatment proves its worth.

JLM Lubricants' Managing Director, Gilbert Groot, advises that this is not representative of real life. Additionally, ethanol and petrol are not perfect bedfellows, as he explains:
"Just as food goes stale over time, so too does ethanol. Additionally, unlike petrol, ethanol absorbs water. Once it can hold no more, the water/ethanol mix separates, causing a useless incombustible mixture to sink to the bottom of the fuel tank, leaving a low octane gasoline layer above it. JLM's E10 Fuel Treatment conditions the fuel to help slow this process, as well as boosting the octane rating to help compensate for the slight loss in fuel economy that results from ethanol-laced petrol."

While running an engine on this degraded fuel causes further issues, the ethanol content in fresh E10 petrol increases soot and lacquer deposits within the combustion chamber. JLM's E10 Fuel Treatment cleans these contaminations and prevents them from accumulating. A further preventative maintenance function forms a protective layer on valve stems and seats, compensating for ethanol's lack of lubrication quality, thus enhancing engine valve/guide life and reducing the risk of valve seat recession.

Mr Groot concludes:
"JLM Lubricants has always been an environmentally responsible company. While we welcome the use of E10 to drive-down road transport's CO2 emissions, E10 petrol risks undermining an engine's efficiency, ironically making it more polluting. With the latest JLM E10 Fuel Treatment, we feel that we have arrived at the optimum solution."

About JLM Lubricants
Established in 2010, based in the manufacturing powerhouse of The Netherlands, JLM Lubricants is a global brand that designs, develops and manufactures a wide range of premium products for the automotive industry. JLM products are primarily developed for the professional motor mechanic working in an increasingly diagnostics based environment.JLM Lubricants have distributors in more than 40 countries and rising.

The JLM team develop products that keep internal combustion engines in peak form. Their fuel additives have a dual capacity – preventative and problem solving; they maintain the lowest CO2 emissions possible and reduce or eliminate the need for repairs.