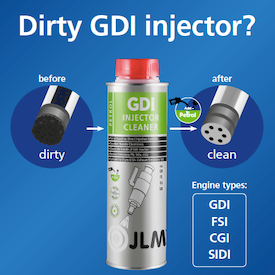 While official testing proves its worth, JLM Lubricants reveals how its latest fuel additive for direct-injection gasoline engines benefits both car owners and garages.

Whether a private car owner, dosing the fuel tank with a special additive for the first time, or a garage technician that performs the task regularly to look after customers' best interests, being wary about squandering money, or causing harm, are obvious priorities.

As a globally responsible additive manufacturer, JLM Lubricants evolves its product range to meet the most recent technical challenges. After identifying that conventional fuel injection cleaners struggled with the latest, high-precision GDI (Gasoline Direct Injection) engines, the Dutch specialist incorporated a dedicated formulation, which both professionals and car owners can trust.

Gilbert Groot, founder of JLM Lubricants, explains: "Even official manufacturer schedules tends not to address the issues related to GDI fuel injector deposits that reduce power and increase fuel consumption. This is because manufacturer service intervals do not provide long-term means of addressing fuel injector efficiency."

While prevention is always better than cure, JLM’s most recent additive is so powerful that independent investigations have also revealed its reparative function, because it also restores badly-contaminated fuel injectors quickly and efficiently.

Testing Times
While some low-end additives tend not to be effective at all, the ingredients of JLM GDI Injector Cleaner stood-up to clinical scrutiny at Millbrook Proving Ground, the motor industry test facility located in Bedfordshire, England. Test analyses, performed with repeatable accuracy on engine test beds, proved effectiveness at not only removing existing fuel injector deposits but also inhibiting their future build. The process is quick, with a verified hour of engine running being all that is needed to restore injectors at a 'critical' level of contamination to 100% efficiency. The tests also revealed fuel consumption improvements of 4.05%.

For garages, the often-onerous task of removing contaminated GDI fuel injectors and sending them away for specialist mechanical cleaning might be avoided, by dosing the fuel tank with JLM GDI Injector Cleaner and simply letting it do the hard work. Workshop time and the inconvenience of having an unrepaired car waiting on garage premises for its repaired injectors to return can be eradicated. However, car owners also save money, worry and inconvenience arising from not having access to their vehicles for several days.

Showing true benefits
Official scientific tests, with their stringently controlled conditions and precise protocols, are not always representative of real-life scenarios, especially on older engines. The British Millbrook evaluations dealt with fuel economy, engine reliability and exhaust emissions but not output, which is related strongly to the other crucial considerations.

Nesled in Kent, a county positioned to the South East of London, known as the Garden of England, the independent engine tuner and DPF carbon cleaning concern, D.V.S Tuning, tested how JLM GDI Injector Cleaner's powerful leansing ingredients aid performance. Instead of using the newest and latest engines, the following evaluations were performed with a standard-specification, 10 years-old, Volkswagen Golf 2.0-litre TSI, with 175,000kms registered. This is more representative of a typical average car on European roads.

Several initial acceleration runs on a certified accurate dynamometer provided the initial pre-treatment data. To establish the efficiency of the fuel burn within the engine (and, therefore, fuel injector performance), a calibrated Air Fuel Ratio (AFR) probe was installed between both catalytic converters, to provide more accurate measurements, contrasted with the simpler 'lambda' AFR method that is used typically by roadworthiness inspectors, of inserting a probe into the exhaust tailpipe. 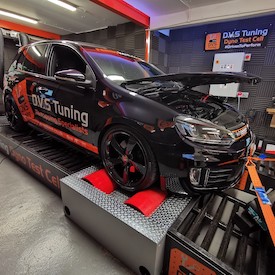 Initial base figures showed an AFR of 15.8:1, against the optimum 14.7:1, revealing that the engine was both starved of petrol and not developing its expected power output. After adding a bottle of JLM GDI Injector Cleaner into a quarter full tank of petrol, half an hour's worth of simulated driving gave the treated fuel sufficient time to commence cleaning the fuel injectors, prior to the pre-treatment runs being replicated, while referencing the base figures. Although the D.V.S Tuning exercise is not to Millbrook’s clinical accuracy, real-time variables, including both ambient air and engine temperatures, were maintained as consistently as feasible in its test cell.

Increases in overall power and torque, by 4PS and 3Nm respectively showed positive gains. However, the more useful mid-range torque increased by 18Nm at 2,500rpm, representing a 7% improvement. Nathan Peto, Director of D.V.S Tuning reports that:

"While the figures prove the effectiveness of JLM GDI Injector Cleaner in an average motorcar, what they do not show is that a misfire that occurred on number three cylinder also disappeared and has not resurfaced in subsequent rolling-road and on-road driving. The AFR also reduced from 15.8:1 to the optimum 14.7:1, confirming that combustion efficiency was restored thanks to powerful chemical cleaning of the fuel injectors.”

With the results revealed, Gilbert Groot concludes:
"While additional time was needed for the full cleaning effect to be realised, the data proves that that our GDI Injector Cleaner delivers tangible results in both laboratory and regular conditions. The removal and cleaning of contaminated fuel injectors becomes unnecessary and the lack of recurrent faults afterwards demonstrates that our blends' preventative qualities are also relevant to addressing real-world problems."