JLM Lubricants have launched a global campaign aimed at automotive technicians. With the endorsement of Darren Darling, founder of the DPF Doctor Network and Steve Scott, founder of SimplyDiag network, the brand is taking on cheap DPF refill fluids where to quote Darling: “We’ve seen an increase in problems caused by inferior quality DPF fluids due to little or no active ingredients. By data logging cars during regeneration, we’ve noticed abnormal behaviour. This has been corrected by refilling the additive tank with JLM DPF Refill Fluid.”

The campaign sees JLM working closely with distributors in countries where the diesel car parc remains robust. Gilbert Groot, Founder and Managing Director of JLM Lubricants said: “JLM DPF Refill Fluid is the universal regeneration fluid alternative for the aftermarket. It can be used as an alternative for all currently known original parts’ numbers for the manufacturers concerned. It’s a premium product at a great price especially when compared to the high price of OEM DPF refill (or regeneration fluids as some are commonly referred to). But in recent months the market has been flooded with really cheap products which upon stringent, independent third-party testing have demonstrated that whilst they do have active ingredients, they’re in such a small quantity they do absolutely nothing to aid regeneration of the DPF. Long term use can cause the DPF to become damaged beyond repair - unwelcome news for the motorist footing a big bill and the technician having to hold their hands up to a bad choice. By contrast, the JLM DPF Refill Fluid contains the highest percentage possible of active ingredients. This is something Darren demonstrates with clarity and humour”

The link to Darren’s demonstration video:

Commenting on the damage inferior DPF refill fluids can cause, Steve Scott said: “SimplyDiag members see vehicles frequently with additive system faults, low DPF fluid levels, communication errors, blocked DPFs and more. We only use tier one products in our repairs and the JLM DPF Refill Fluid fits the bill perfectly. It has the appropriate active ingredient concentrations, putting it on par with the OEM fluid specifications across 4 fluid types - something cheaper brands don’t always have or comply with. This is noticeable when we have vehicles that have been "topped up" at other workshops and systems reset. They often return DPF faults and block the DPF within a short period of time. It’s a big problem when inferior products are used because it can lead to rapid, irreparable, thermal damage of the systems designed to lower DPF temperatures.”

“We want to talk to technicians about why their choice of DPF Refill Fluid is crucial,” said Groot. “Just one bottle of the JLM DPF Refill Fluid gives up to 70,000 miles of protection. It keeps the DPF in good condition, aiding the natural regeneration of particulate filters at low temperatures. If a mechanic is basing their choice on lowest price, it’s time to think twice.” 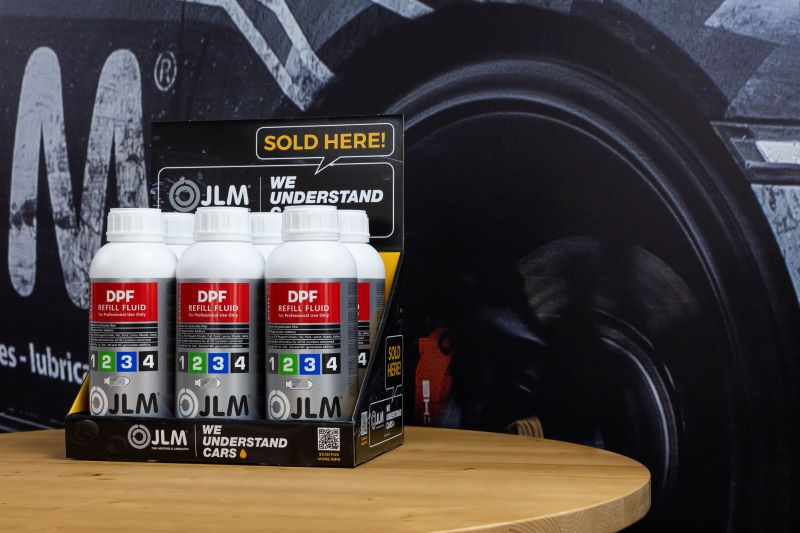